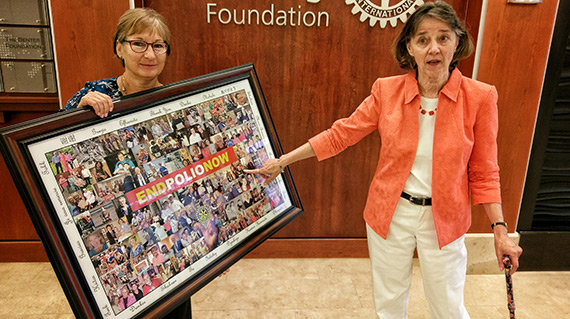 On 9 September, we received a visitor at Rotary International World Headquarters in Evanston, Illinois, USA, who reminded us just how important the fight to eradicate polio is.

Every year, fewer and fewer cases of polio are reported, bringing us one-step closer to a polio-free world. Before Rotary launched the PolioPlus program in 1985, some 350,000 people a year were infected with the disease worldwide. Carol Ferguson was one of those people.

She is also the founder of the Pennsylvania Polio Survivor’s Network, an organization that provides resources for people living with post-polio syndrome, an illness that can affect polio survivors 10-20 years after being infected with the virus, and which also impacts their families.

As Ferguson built her organization, she often turned to Rotary for information about polio and ongoing eradication efforts. She soon discovered how much work Rotary, along with its partner organizations in the Global Polio Eradication Initiative, have done. Knowing firsthand the effects polio can have, Ferguson set out to create a Collage of Gratitude to show Rotary how much she and other polio survivors appreciated the work of …read more