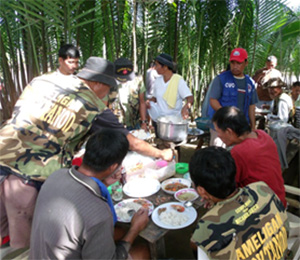 By Jerry Olson, past president of the Rotary Club of Metro Roxas Central, Capiz, Philippines

When then President-elect M.A.T. Caparas, the only RI president from the Philippines, introduced the Rotary Community Corps (RCC) program in 1985, I’ll bet he didn’t envision the effect it would be having on the world today.

His vision for RCC’s has improved the quality of life in villages, neighborhoods, and communities all over the world. There are now around 7,500 RCC’s in over 80 countries.

RCC’s are not made up of Rotary members. They are people living in their communities. They may be farmers, tricycle drivers, or even retired people. But they hold one thing in common – they each are committed to their community’s long-term development and self-sufficiency.

In 2011, a member of the Rotary Club of Metro Roxas suggested looking for a way to bring water to the impoverished …read more